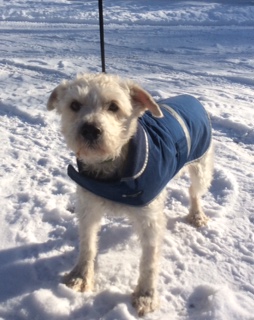 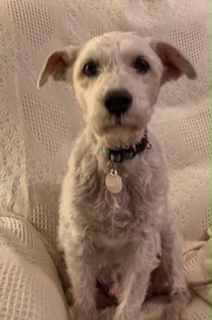 We are pleased to introduce Harry, who is finally available to adopt.

He arrived in October, as a shelter dog with no history, but with the help of our vets, we have estimated his age to be under ten years, a senior dog.  He is neutered, about 25#, vaccinated, microchipped, with a fresh dental cleaning.

Harry has nice manners, he very rarely barks and knows to take a treat gently.  He loves to eat and cleans his bowl with gusto at every serving.

We believe his parents may have been a poodle and a schnauzer, making him a “schnoodle”.  He loves to ride along in the car and sits in the backseat like a gentleman.    It is obvious that he was around toddlers at his former home, as he seems to be drawn to them, as well as children of other ages.

What does Harry want?  He would like his new people to include him in most of their daily activities and to take him for nice leash walks.  What doesn’t Harry want?  to be left alone in a crate.  There is no destruction, but a great deal of stress and whining.

He has been living with other dogs in his foster home and he gets along well.  He shows no interest in cats.  He has no food aggression.  At night, he sleeps in his dog bed on the human’s bedroom floor, rarely moving until morning.

He is house-trained, and relies on people to take him out at appropriate intervals, as he has not established a signal to go out.